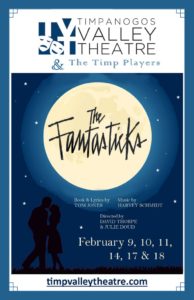 TVT kicks of the 2017 season with a new black-box style series, starting with The Fantasticks just in time for Valentine’s Day. This sweet and thoughtful little musical is filled with drama, romance, comedy, swash-buckling and happy endings.  It gently brings audiences back to a simpler time in their lives when no one wept except the willow.  The original production ran for over 40 years.
At the end of April, Bye Bye Birdie will burst to life – slated to feature a live rock band for accompaniment with lots of roles for local teens and adults.  It should make for an exciting evening as small-town girl Kim McAfee is the winner of superstar Conrad Birdie “One Last Kiss” before he is headed off to join the army. At once celebrating and mocking the teen culture of the late 1950s this show is full of memorable characters and fun songs. It’s sure to entice you to “Put on a Happy Face”.

In mid-summer they will be offering a new two-week Young Adult Shakespeare Boot camp for actors ages 14-20.  Led by David Liddell Thorpe, the actors will hit the boards with the bard’s Taming of the Shrew amidst gales of laughter.

Stick around for the fall the line-up promises to be worth a watch. Louis Sachar’s own play adaptation of his award-winning Young Adult novel Holes. It tells the story of Stanley Yelnats – a boy plagued by the curse of his no-good-dirty-rotten-pig-stealing-great-great-grandpa.  When he is in the wrong place at the wrong time he is accused of
stealing a famous pair of tennis shoes and sentenced to digging holes in the dried up lake-bed at Camp Green Lake.  Originally created for the Seattle Children’s Theatre – in the stage adaptation, scenes from the past and the present unfold simultaneously on-stage.
For Halloween – adult performers will team-up with the Arts Smarts kids to put on a special production of We Are Monsters, a short, sweet children’s musical.  We anticipate this being an excellent opportunity for whole families to perform together.
To cap things off TVT plans to have one more black-box production with the Timp Players – title TBD.
Their volunteers are comprised of many local talented and experienced artists who put their heart and soul into the work done at Timpanogos Valley Theatre and we appreciate every single time someone in the valley makes the effort to come out and watch our shows perform!